Exclusive to online subscribers – featuring the best interviews, special features and much more…

There may have been just 29 cars at Sheffield on Sunday afternoon, but between them they produced one of the best meetings of the season, with an action-packed session full of hard hits, last-bend finishes, a rollover and a controversial end to the meeting final.

It was Nigel Green who flashed past the chequered flag to win the final, after lunging at Joff Gibson on the final bend, to come out the other side in front.

After the dust had settled, however, and after much deliberation, the meeting steward docked Green two places for kerb-cutting and awarded the race to Gibson, with John Dowson third.

Green was unhappy with the decision and appealed, using video and photo evidence suggesting he had used a manoeuvre the majority of drivers execute at Owlerton Stadium on a regular basis. As a result, the following day Green was reinstated as the winner. It was Green’s eighth final win of the season.

The meeting began with a nine-car whites and yellows race which was won by Eliot Smith, with Robert Plant second and Geoff Nickolls third.

Russell Cooper led the opening 22-car heat early on before pulling off with a flat tyre, then Gibson took over from Nigel Harrhy at halfway. Mat Newson, who has become a Sheffield specialist, took up the chase but ran out of laps to get in a blow and had to settle for second. Lee Fairhurst finished third, ahead of Danny Wainman, Frankie Wainman Jnr, using a spare car normally raced by Karl Hawkins, with Green sixth.

Heat two featured 20 cars and was stopped after a couple of laps after Plant clipped Nickolls, who had spun into a turn one fence post, hitting the fence hard. The pack soon piled in, with both Newson and Hawkins spinning. Hawkins pulled off, while Newson restarted at the back of the field, which was led by Jack France from Smith, Chris Brocksopp, Mal Brown and Ben Riley.

Two laps into the restart and Smith pushed France wide into turn one, with Brocksopp close behind and leaning on both. All three drifted wide towards the fence with Brocksopp climbing over the bonnet of France, which tipped him into the air and into a huge roll, ending up on his roof. As a result, with the pack charging in behind, the track was completely blocked. 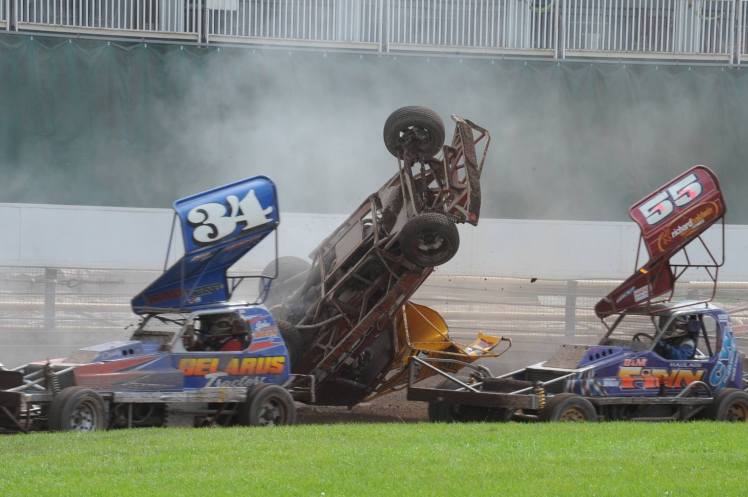 The restart was led by Smith, from Riley, with Brown and Craig Finnikin next. Riley gave Smith a big hit into turn one, but Smith got superior drive out of the corner to momentarily lead into turn three. Riley dived up the inside, only to tangle with the leader and was collected by Finnikin close behind.

Will Hunter led the restart from Green, Finnikin and Brown, with Green taking the lead after a well-executed last-bend move to take the win. Finnikin and Newson slipped through for second and third, while Hunter recovered to finish fourth, ahead of Danny Wainman and Brown.

The final fielded 19 cars and the yellows came out after four laps after Hunter went into the fence. Gibson led the restart ahead of Dowson, Cooper, Green, Newson and Wainman Jnr.

Gibson maintain his lead from the restart and it was Newson, who had past Green, who posed the biggest threat. The Norwich superstar closed up on Gibson, giving the leader a huge hit into turn one with five laps to go, only for the prop shaft to brake which left him drifting into retirement.

This left Green to take up the chase and on the last lap was close enough to take a dive up the inside of Gibson into turn three to take the lead and the flag. Once the steward’s decision was overruled the following day, final result was confirmed as Green the winner from Gibson, with Dowson third. Finnikin finished fourth, ahead of James Morris and Wainman.

“It was a good day’s racing,” said Green later. “It was just a shame I got disqualified. It’s not what you need when you go on a good day out and end up with a load of hassle.

“I won the race, pulled round and was told I was disqualified. John Dowson’s mechanic came on the track because he finished in the top three and he said, “I was standing at the corner and my man was videoing it and I can guarantee you did not cut that corner”.

“I was then told afterwards I had been given third place. But I said “I was disqualified earlier and now you’re giving me third?” So I didn’t know what was going on.

“So I obviously aired my views that I wasn’t very happy and that I was in the right. So that was that. I went out for the National and started from the normal grid position.

“I went up to the box with the video and showed them it. They still didn’t agree. But I knew it was going to kick off, because as soon as I saw the video it was obvious I’d done nothing wrong. So you just feel a bit frustrated.

On shale everybody runs a wheel up the kerb and it shouldn’t make any difference whether you do it on lap one or lap 20. If that is the rule, then nobody can do it and it needs to be sorted out, or if some people are allowed to do it, then everyone can

“I put my case together by e-mail and sent some photos and video stills of the last corner, plus about five other photos of others driving over the kerb at different tracks and at Sheffield.”

On Monday evening, Green received an e-mail from the BSCDA to tell him he had been reinstated.

“On shale everybody runs a wheel up the kerb and it shouldn’t make any difference whether you do it on lap one or lap 20,” Green said. “If that is the rule, then nobody can do it and it needs to be sorted out, or if some people are allowed to do it, then everyone can.”

Although Gibson had been awarded the race on the day, he didn’t take part in the 16-car Grand National. The race was stopped after six laps when Dowson launched at Wayne Marshall, only to tangle, taking Plant with them. Newson also tangled into turn one with Morris and Luke Dennis, who had a sizeable lead, also ended up involved in the melee.

The race restarted with Dennis maintaining his lead, from an ill-handling Wainman Jnr, Green, Finnikin and Danny Wainman.

Wainman went on to take the victory, ahead of Finnikin, Johnson, Harrhy, Frankie Wainman Jnr Jr and Newson.