Exclusive to online subscribers – featuring the best interviews, special features and much more… 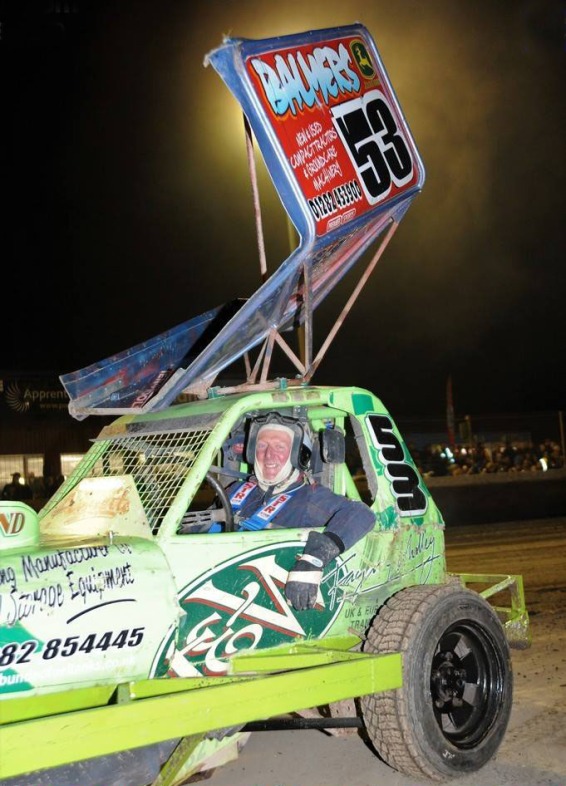 The King’s Lynn Shootout round last Saturday saw eight-time BriSCA F1 world champion JOHN LUND make his long-awaited return to the track. He spoke to NEIL RANDON about his first meeting in almost two years and on life away from stock car racing.

Having been off the track since the last meeting at Coventry on November 4, 2016, many stock car fans believed they would never see John Lund race again. There had been no discussion about retirement, but equally no talk of a comeback either.

But if you spoke to those close to him, they would tell you he was still intending to make a return. The only person, however, who really knew for sure Lund would make a comeback was the man himself. He never had any doubts.

After Coventry, where he finished fifth in the Grand National, Lund had every intention of being ready for the following season.

“The season ended at Coventry, and that was the last meeting we raced at,” Lund says. “We got the bus MOT’d and insured during the winter period and we sorted the car out at nights. Everything was ready, but from then onward I have been so busy. So we never had time to go racing.”

Months then became a year. “Then suddenly it was the end of the season, and I never raced,” says Lund. “And it was a similar situation this year, really.”

While Lund’s absence coincided with the self-destruction at Brandon, that is where the similarity ended. 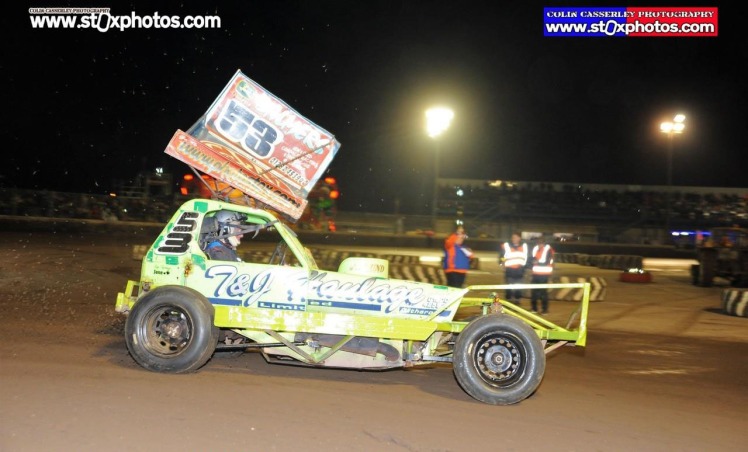 For the 64-year-old it was simply work that had consumed all of his spare time. It began with the purchase of another farm to run alongside Wood Farm, where the Lund family still live.

“Just over 10 years ago we bought a farm on the other side of the village, a smaller farm, and we keep animals up there and grow wheat there,” Lund says. “It’s about 130 acres.

“Then about three years ago the farmer next door retired and the landlord asked us if we would like to rent the land in addition to Wood Farm.

“And so it was too good an opportunity to miss really, but obviously it creates more work…”

Farming is hard graft and much of it is done by Lund himself, although he has one farmhand, Keith, who has been with him for more than 25 years.

I get anybody else I can persuade to help me, really! Annette included – she helps with the milking

“Keith is still here,” says Lund. “His son is at secondary school and he comes up sometimes during the school holidays and weekends to give us a hand.

“We’ve a couple of girls who come and help part-time with milking every other weekend and then I get anybody else I can persuade to help me! Annette included – she helps with the milking.”

Lund has 550 cattle, including young stock, with between 200-230 currently milking cattle.

Milking, as well as growing and harvesting crops, all on a sizeable amount of land, takes plenty of time and effort. And so it affected Lund’s opportunity to go racing, particularly at weekends.

However, that didn’t stop him for working on his cars.

“Any free time I’ve had in the evenings I’ve been rebuilding the car I raced prior to the green one,” Lund explains.

The car in question rewarded him with his eighth World Final in 2002.

“I’ve got the Tarmac car which I’ve robbed bits from, but I’ll probably use the old car for shale and probably sell the green one”

“We’ve been working on that for about four years!” he says. “The intention was to have it ready for the start of this year, but that didn’t happen. It’s not far off now. If we’d been working on it 20 years ago, we would have had it done in about two weeks. But time seems to fly by and you’re busy doing other things.

“Every week we still work on it. When we started on it, it was two years before Coventry shut. I always felt we could make it an even better car for shale and so I was altering it to improve it. I’ve got the Tarmac car which I’ve robbed bits from, but I’ll probably use the old car for shale and probably sell the green one.

“My intentions have been since May to go racing but it has been so dry this year that we’ve taken more crops of silage and it often works out you do that at weekends for some reason. And so another weekend’s gone.

“The wheat crop generally gets harvested in August and then suddenly it’s October and we’re thinking “Oh my god, we’re going to miss the season again!

“But hopefully, we’re better organised now and there’s no more silage to do and so it is bit of a quieter period to find time to go racing.” 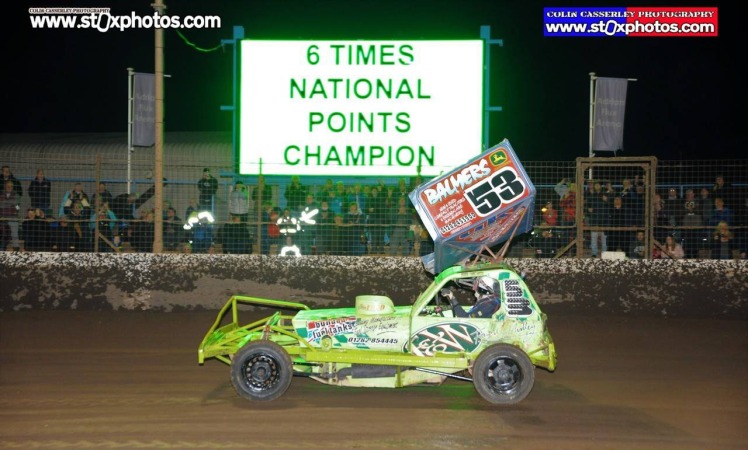 And so, in a brief post on Facebook last week, Lund’s wife Annette announced her husband was booking in to race at King’s Lynn. And sure enough his number featured on the list of BriSCA F1 cars preparing to compete at the National Points Shootout round at the fast Norfolk shale oval.

Naturally, the mood among stock fans immediately lifted. There were those who had not visited a stock car track since the shocking demise of Coventry Stadium, but the return of ‘King John’ forced many Coventry stalwarts to wake from their torpor and make plans to travel to King’s Lynn to see their hero back behind the wheel again.

Lund’s return to racing is symbolic. It is like the clock had been rewound to 2016 again, or even further back, when the sport had appeared set on solid foundations. The future, while not fully based on optimism, was at least stable.

“Maybe occasionally you might hit on the right set-up, whereas on shale everyone has to turn up and you have to adapt to the conditions on the night”

After this season is over it will be a case of getting the revamped shale car ready for next year’s campaign. “I’m not that fussed about Tarmac, to be fair,” Lund admits. “The lads that do well have time to go and practice and set the cars up. If you can only go racing on the day, maybe if you get there early enough you might get a couple of laps, but you can’t compete really, not week in, week out.

“Maybe occasionally you might hit on the right set-up, whereas on shale everyone has to turn up and adapt to the conditions on the night.”

Another aspect of modern-day BriSCA F1 Lund would like to see change is the attitude among some of the drivers. It has always been a hard, full-contact sport, but animosity between drivers occasionally envelopes the sport.

At the height of Lund’s career in the 1980s and 90s, there were plenty of big-hitters on track – drivers who were more than willing to wrap the sport’s No.1 driver around a fence post. It was a case of being prepared to hit or be hit.

“I feel the racing used to be a bit more ‘sporting’,” says Lund.

One of his biggest and most notorious rivals was Bobby Burns, who use to call him John Lunge.

“I can remember I had a few battles with Burnsy years ago,” Lund says. “And you used to have to queue up to collect your prize-money or start money after a meeting and Burnsy would always go and collect his own.

“If I was holding him up or in his way I could expect to get shoved in the fence, and visa versa. And we remained mates”

“But we had a laugh about it. And obviously the next time we were out on track together I had to keep an eye out for him, but that was just how it was. If I was holding him up or in his way, I could expect to get shoved in the fence and visa versa. And we remained mates.”

Even when Richard Pratt famously piled Lund into the fence at Northampton in 1988, when the gold car went in with such force it ended up on its side and welded to the wires, Lund was still able to put that deliberate fencing to one side.

He walked back up the track and shook Pratt’s hand. Later in the day, Lund exacted sweet revenge with an equally fierce hit into some parked cars in the Grand National.

But Lund and Pratt remain good friends to this day. “Whenever I see him at the track we have a good old chat,” Lund says.

In the King’s Lynn pits Lund was surrounded by well-wishers and friends he hadn’t seen for some time. “There were so many people in the pits I knew,” says Lund. “And faces. I may not know them by name but I recognised their faces from all the years I’ve been racing.”

Before his heat at the Adrian Flux Arena, Lund entered the stage to a hero’s welcome, power-sliding his bright green shale car around the track for a couple of laps to the appreciation of his fans.

Typically, Lund was more than a little nonplussed at all the fuss. He’d rather just come out on the track with the rest of the field and take up his position on the grid. “I would have preferred to just have quietly gone on the track,” he says. “Before I went out I felt a bit under pressure not to make a mess of it in my first race back and to try to live up to their expectations.”

He needn’t have worried. A fifth-place finish in his first race for 23 months was quite an achievement.

“I was quite pleased, but in the two years since I have been away there are more drivers who went out in the final who are quick, whereas perhaps two years ago there were a few more slower ones. Everybody is a bit quicker than they were. But then again I might be a bit rusty as well. I’m old and slow!

“At King’s Lynn the racing line has changed quite a bit to what it used to be. You used to go round the corners a bit tighter, which tended to be the quicker way round, but now everybody seems to be going out a bit wider.”

In the final after a decent start, Lund got collected by a B-grader and ended up at the rear of the field and then in the Grand National he popped a rear tyre on the first lap.

“It was a disappointing end to the night, but that’s racing,” says Lund.

And so his King’s Lynn exploits came to an end, but at least we know the John Lund story still has a few chapters remaining. “I’d like to go to Northampton, but it’s a long way and I’m supposed to be milking that weekend,” Lund says. “So I’m thinking it is more likely to be Belle Vue in November.

“But it was good to see everybody again. It’s good to be back.”